NEW YORK, July 24, 2022 /PRNewswire/ -- Despite a record-breaking heat wave in New York City, more than 1,600 athletes jumped in the Hudson River to compete in the 20th running of the Verizon New York City Triathlon, owned and produced by Life Time. Competitors ranging in age from 14-81 took part in the annual summer endurance event that has captivated the Tri-State area since the race's initial competition in August 2001. 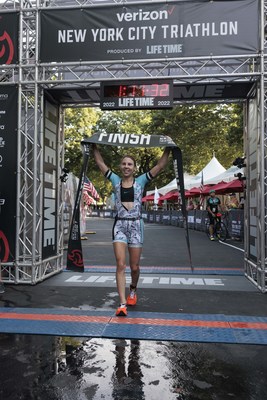 While the shortened bike and run portions were reduced from 24 and 6.2-miles to 12.4 and 2.5-miles, respectfully, the enthusiasm was palpable for athletes, spectators, volunteers and others.

Pittsford, New York native Amy Cymerman became the first female to repeat since Alicia Kaye (2014-2015), crossing the finish line in 1:08:33. "Last year, it was an extremely hot and humid race and I expected it to be the same this year. I did heat prep and it gave me an edge today," said Cymerman. "I had my family here and it was awesome to be able to do win again in a different format."

"This is my first time in New York, it's a really good feeling. I did 3 races this month and won two of them," said male winner, Danilo Pimentel. "It's been amazing for me and my country."

For the first time in the history of the triathlon, Life Time introduced a new official duathlon in-person event as an option for those who may be new to the sport, or who only wished to compete in the run and bike disciplines. Similar to the triathlon, changes were implemented to the duathlon with the first leg of the race being reduced from a two-mile run to one. Duathletes also pedaled 12.4 miles and ran 2.5 miles, finishing in Central Park.

For complete results on the 2022 Verizon New York City Triathlon, owned and produced by Life Time, visit www.nyctri.com. For more information and updates on the Life Time Tri series, visit lifetimetri.com, as well as on Facebook, Twitter, and Instagram.

The races compliment Life Time's rapid and exciting growth throughout Manhattan with four high-end health clubs currently open at Sky, 23rd Street, NoHo, and Battery Park. Three locations are slated to open in the coming months including: One Wall Street, Dumbo and Midtown with more into 2023.

The Verizon New York City Triathlon is owned and produced by Life Time. It is among more than 30 premier athletic events owned by the company, as a part of its healthy way of life philosophy, including the Life Time Miami Marathon and Half Marathon, the Chicago Triathlon, the Leadville Race Series, and the Garmin UNBOUND Gravel. Each event is produced to provide an exceptional event experience for both athletes and spectators alike.

Life Time (NYSE: LTH) empowers people to live healthy, happy lives through its portfolio of nearly 160 athletic country clubs across the United States and Canada. The company's healthy way of life communities and ecosystem address all aspects of healthy living, healthy aging and healthy entertainment for people 90 days to 90+ years old. Supported by a team of more than 30,000 dedicated professionals, Life Time is committed to providing the best programs and experiences through its clubs, iconic athletic events and comprehensive digital platform. 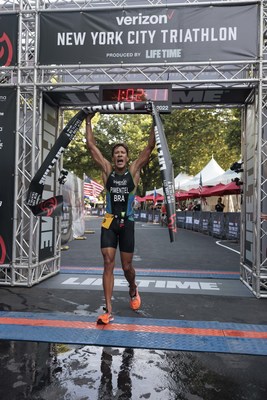